How 100 Blocks helped save my life

Sounds kind of dramatic right? Well, participating in the 100 Days Tula Pink City Sampler quilt along last year was an eye-opener and returning to my project this year, and starting the sew along again this year has really shed some light on my health and progress. 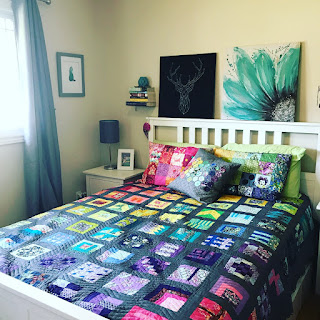 Lets start at the beginning! When I started the sew along last year, I truly believed that the rule was you make a block a day. No wiggle room. So no matter what was happening in your life, you could only make one block a day and it had to be on the right day. WHO IS POLICING THIS!? No one. That's who! Even if that was the way it had to be, no one is checking my sewing room to see if I have worked ahead!!! I started slow making one block a day following the rules to a T. Even if they weren't really rules, just what I assumed to be rules!

About 2 weeks in I got overwhelmed. I had started out with two fabric selections and was making two of each block. That ended. I couldn't keep up and I wasn't getting double entry into the contest so what was the point? I wasn't going to put both of them on my bed was I? Maybe, I don't know!

After another week or so I realized I couldn't keep up with the pace if I was going to sew every single day. So I started cutting ahead. I would cut 10-15 blocks at a time so at least that part was done.

Slowly I relaxed my made up rules and by the end of this thing, I was sashing and completing the quilt before we reached day 100!! I had made some progress on my rigid thinking. 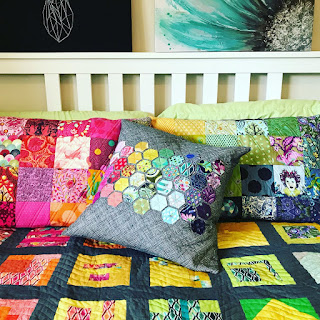 But that didn't go off without a hitch either! Some of my blocks weren't exactly 6.5" square, they ranged from 5.75" - 6.5" and many weren't even square!! This bothered me. I tried to ignore the problem and just force each block into the quilt. I sewed the sashing between each block to make 10 rows. Then I started putting rows together. This quickly became a big ole disaster! Some rows were inches shorter than others!!! whole inches!!! And I had laid out the blocks exactly the way TULA did so I couldn't change the layout!

So I started unpicking seams and making my 1/4" seam allowance more like an 1/8" seam allowance in some places to try to stretch those smaller blocks. It didn't make the difference I had hoped. Blocks still weren't lining up the way I wanted and needed them to! So I put that fucker into a drawer and forgot about it. I added it to a to do list and then added as many things above it as I could think of. 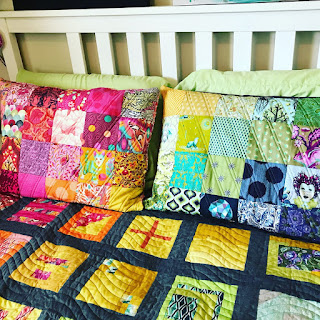 For almost a year I forgot about it. Then my kiddo started pestering me. Keep in mind that this entire year I was seeing my Psychologist weekly and we were doing a LOT of exposure therapy. I conveniently didn't tell her about this project so she wouldn't make me forge ahead. Whoops! ;)

Eventually I came back to it. I ignored the fact that some rows were waaaay too short and put the outside sashing on crooked to accommodate. My finished quilt isn't a big ole square like it should be. Its not even a quadrilateral. It is some kind of weird blob shape. But its my blob!

I sent the monster to be quilted by the lovely HolyStitch.ca and she made it look even better! I got it back and bound it with some scrappy Tula binding and it has lived on my bed ever since. A year ago I got anxious even thinking about working on it. Now I sleep peacefully under that wonky fucker and I love it! A friend of mine contacted me shortly after it was finished. He desperately wanted a pride rainbow on his bed and this quilt was perfect for it! I thought it through and decided this quilt had been too much a part of my growth as a quilter, and as a person recovering from severe OCD. The quilt is still mine and now I am facing the dilemma of putting it in the wash for the first time.....what if the colours bleed!? That will be a whole new blog post I'm sure!! 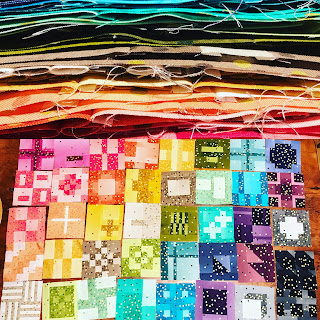 In the end, this quilt has given me so much perspective. This year I am doing the project again and I am surprised to see how rigid I am with my cutting and stitching still, but I am super relaxed about what colour goes where! Last year I wanted to do each block as close to the book as possible! This year, I don't care what colour my block is, just that it is one of the fabrics I have chosen. I am doing it with V & Co Ombre Confetti this year and I LOVE IT!! Maybe each block will be closer to 6.5" this year! If not, I know a perfect blob shape it can be!